For already imported stand registers that have been used as input data (and not only to link with existing data), it is recommended that you re-simulate the forest data via menu Data Management > Stand Register > Simulate Treelist (Datahantering > Beståndsregister > Simulera träddata). As a result, the tree ages and heights for young stands will be more consistent with the input data.

Changes in the user interface

There is indeed an overwhelming number of parameters that confront the user of a Heureka application. Therefore, a simplified view of the so called control tables is now available. By choosing this, you will only see a subset of parameters, those we consider the most important for normal users to have access to. You can also customize what parameters to display in the simplifed view. You can change freely between Advanced and Simplified View, it is only how and what parameters are displayed that is affected. You can access the simplifed view via menu Settings > Advanced/Simplified View. When using Simplified View, only one table is displayed for each control category, instead of one table for each control table in the control category. A table will show all parameters with non-default values, and all parameters that have been added to the simplified view. see help documentation

The start page has been redesigned and displays news from SHa and release notes.

In PlanWise and RegWise, the Intial State Overview page has been redesigned and shows more diagrams than before. You can also copy data from the page to Excel.

In PlanWise and RegWise, the visual structure of the contents of a forest domain has been improved, so that is easier to distinguish between conditions and control category connections.

In StandWise, PlanWise and RegWise, graph symbols and lines have more variation.

The default choice of using a whole stand growth model for calibrating the single-tree calculations is inactivated when creating a new project. This parameter is found in control table Production Model as "Growth Model Whole-Stand", and has been changed to "None", meaning that Björn Elfving's single-tree functions are used alone, without calibrating them with the stand-level growth model. The reason is not more accurate growth predictions per se, the differences between the models are rather small, but the single-tree growth functions used alone gives a smoother transition from the young stand phase to the established phase, at least in numerous cases tried.

The default function choice for calculating tree diameters for sapling trees (parameter "Sapling Diameter Model" in control table Production Model) has also been changed, from "NystromSoderberg" to "Elfving", for the same reason.

For existing projects, it is not critical to change these parameters, but if you do detailed stand-level analysis for example and find it annoying that the annual increment marks a drop or sudden increase when a stand leaves the young stand phase and enters the established phase, consider testing the new default settings.

A new mortality model is available and used as default model in new project. For existing projects (created in previous program version), we recommend that you select this model instead. The model is called "Elfving" and is selected in control table Production Model. With the old model, mortality in non-dense stands have been calculated with a somewhat "primitive" model (Göte Bengtsson 1978), with a fixed mortality precentage for each species. The new model is a single-tree model based on a large set of NFI-data (Rikskogstaxeringens data). The new model also replaces the single-tree mortality model by Fridman & Ståhl which has been used until now to distribute mortality to trees. The latter is in it basic form a stochastic model, while the new one is determinstic, and therefore better suited for Heureka.

For already imported stand registers that have been used as input data (and not only to link with existing data), it is recommended that you re-simulate the forest data via menu Data Management > Stand Register > Simulate Treelist (Datahantering > Beståndsregister > Simulera träddata). As a result, the tree ages and heights for young stands will be more consistent with the input data.

For an established stand, Heureka calculates the mean age (variable "ForestData.MeanAge excl overstorey") as the basal area weighted mean age of the trees. For a young stand, the variable is calculated as a weighted arithmetic mean age, where the calculated probabilities for crop trees (beräknade huvudstamssannolkheter) are used as weights. In established stands (mean height ≥ 7 m), tree ages are by default calibrated so that the calculated mean age and the mean age imported (for example from the stand register) are the same. This calibration has not been applied for young stands. The reason for this is that the imported mean age for young stands has not been used if a mean height has been available. In that case, the mean age has been based on the calculated sapling ages, which in turn depend on tree heights and site index. This have resulted in a more model-driven than data-driven approach, which is probably good since data for young stands are often reported as very uncertain. If relying too much on the age/height relation in young stands, there is a risk that the calculated growth for young stands with a large height/age ratio is overestimated. In stands where there have been a few years of large height growth, these few years constitute a large part of the total age of the stand and will affect growth much more in relative terms than is the case for an older stand. As a drawback, the ages for young stands calculated in Heureka have often differed from the mean ages in the stand register. Several measures has been taken to handle this, and some more will be available later this year in version 2.1.

The variable "ForestData.Stand Age" (see above) could also be useful when the mean ages calculated in Heureka are not consistent with those in the register data. Heureka creates a tree list not until the mean height is 2 m. For smaller stands, a "waiting" period is used, and once the period is reached when the stand is at least 2 m, the stand is "activated". 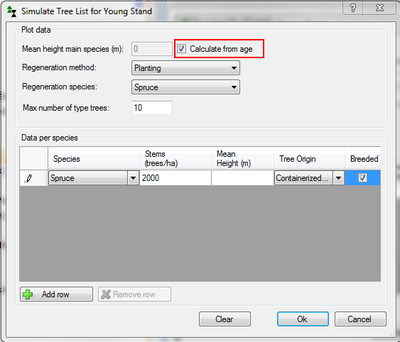 Figure 2a. You can select whether the mean height of a young should be calculated by the program based on the entered stand age, or retrieved from the entered value. 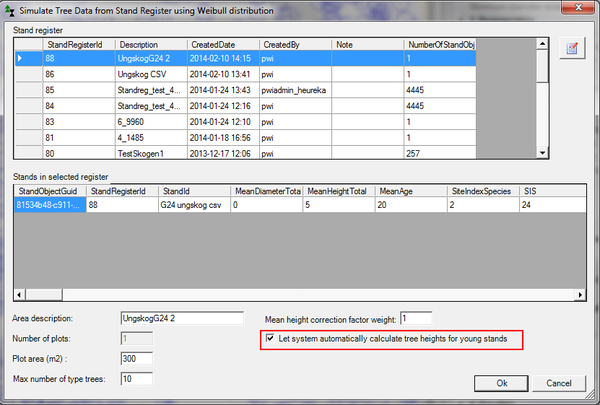 Figure 2b. You can select whether the mean height of a young should be calculated by the program based on the entered stand age, or retrieved from the entered value.

When entering data manually for a young stand, the sapling type origin and age when planted can be entered for each species. Using this feature does not currently affect results much, but is more a preparation for future refinements for the modelling of young stands and regeneration.

Growth response after fertilization is calculated with a model that predicts volume growth increase on a per ha basis on each sample plot. The way this growth increment is distributed to the trees has been modified to a more exact but also a simpler and faster solution. The growth response will be marginally different than in previous versions.

You can evaluate your own assumptions on future changes in real costs and prices. You can do this by setting a time point and a cost or price adjustment factor that will apply from that time and onwards. You can define different price factors for timber, pulpwood and bio fuel, and different cost factors for different treatment activites. For price lists, an additional bucking (aptering) is applied, to get the correct output for the adjusted prices. Interpolation is applied to time periods between the start period and the time point you enter.

Minimum final felling (LÅF) is calculated in each time period and management alternative and depends on regeneration species. The minimum final felling at the initial state has been available as result variable TreatmentUnit.MinFinalFellingAge. This has been moved to ForestData.MinFinalFellingAge. The result database is automatically updated, but if you use the old variable in report templates or optimization problem you must change the column mapping to the new variable.

When doing final felling, the harvesting and forwarding operations destroys a considerable part of the existing dead wood. In control table Dead Wood, the advanced user can modify how much of the existing dead wood (percentage) that is removed to the last decay class (4). It is also possible to define assumptions on to what extent dead wood in set-asides within a stand (hänsynsytor) is affected.

Heureka calculates mean age (variable "ForestData.MeanAge excl overstorey") as the basal area weighted mean age of trees in established stands. For a young stand, it is calculated as a weighted arithmetic mean age, where the calculated probabilities for crop trees (beräknade huvudstamssannolkheter) are used as weights. Typically, the calculated mean age does not increase by exactly the same value as the period length, since it is weighted. Also, the initial age may deviate from the input mean age, especially in young stands. Variable StandAge has been added to result category ForestData to represent age since regeneration (plus sapling age when planted which is currently hard-coded to 2 years). In period 0, it is the same as the input data, and then increases by five years per five-year period until final felling.

A new help section gives an overview of the user interface, with sub chapters for each application. see http://heurekaslu.org/help/test/index.html?oversikt_anvandargranssnitt.htm (only in Swedish)

A new user forum is available at http://heurekaslu.org/forum

After regeneration, result variable GrowthData.CAI net has been calculated as annual growth since since plantation, instead of change in standing stock between periods + harvested volume in previous period divided by number of years since last period. This is not a true error, but it has given missleading results when generating forest-level reports on mean annual increment. This has been fixed.

When importing contorta sample trees from FMPP data (Indelningspaketet), the tree height calibration factors were faulty, because of a mix up in the translation of species codes. This affects calculations of contorta, oak and beech volumes and heights. Contorta tree heights have been calibrated with those for beech, and vice versa. If an area has contained contorta but not beech, the tree heights for contorta has not been calibrated, and vice versa.

Links to web page were faulty both in the help documentation and the in the programs.

When applying imported thinning proposals, no more thinnings were simulated until final felling. This has been fixed.

This is not really a program bug, but a documentation error. The code for final felling with seed trees was defined as 16383 instead of 16384 on both the wiki and in the help documentation. This has been corrected. But the program has also been modified so that it recodes an imported treatment proposal code 16383 to 16384.