MSI-installations has not offered automatic upgrading as ClickOnce, but now they do.

In version 2.0 the default function for basal area growth was changed to the single-tree growth model by Björn Elfving. The reason was that it gave a slightly smoother growth curve in the transition zone from young stand phase to established phase. However, it has been discovered that the single-tree function can be sensivitive to somewhat extreme stand states, for example if all trees in a stand have exactly the same diameter (not realistic maybe but a possible research case, and also revealing the behaviour of the model). The stand-level function is more robust and the transition from young stand to established phase works quite well with the other changes included in version 2.0.
Here you can read more about the changes in version 2.0:
Release news for version 2.0

The models for allocating regeneration, cleaning and thinning activities to stands have been modified so that the obtained areas and volumes vary less between different simulations, and are closer to the calculated or entered target levels.

In PlanWise and RegWise the initial state is presented in the window Intial State. This has been extended with the following features:

You can now used OR-type conditions in reports. An example is if you would like to sum the area of partial set asides ("generell hänsyn") with full set asides (stands put in forest domains that are unmanaged). In previous version, you had to create two different reports for these. 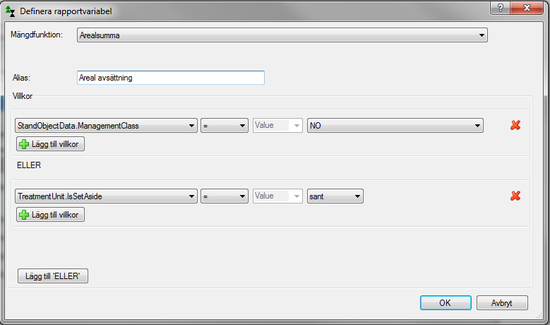 A new feature is the possibility to use "Or"-conditions when defining forest domain.

In StandWise there is a new function for showing a log tally for a given harvest activity. You can find the function in the View menu and in the toolbar beside the Net Present Value button,

Save simulation result in StandWise

When you simulate a regeneration in StandWise and choose to plant with breeded plants, you can enter all settings needed in a form specifically designed for StandWise. IN previous version, you had to use the same form as was designed for PlanWise and RegWise (via control table Treatment Model > Breeding Effect).

You can now include more than one species group in a thinning group. You do this in control table Treatment Model under Thinning Configuration, and the feature is available when Thinning Model is set to "LOEriksson" or "Hugin". The option "HuginOld" works as before. In previous versions, each species group have been assigned its own thinning specification. In addition, all species groups that you have not defined a thinning specification for, are placed in the same group. The new feature leads to that the choice of thinned trees is more is more determined by tree size than tree species.

In the same ways as for thinning (see above) several species group can be included in the same cleaning group. You do this in control table Treatment Model under Cleaning Configuration.

Calculation of expected occurrence of root rot in Norway spruce

A model for calculating root rot occurrence in Norway spruce has been implemented (Thor et al. 2005, see below). The result variables are located in the result group Mortality Data. The result variables are the expected number of infected trees ("Root Rot Stems"), and basal area ("Rot Root Potential Basal Area") and volume ("Rot Root Potential Volume") for these trees. The basal area and volume refer to the whole trees, not only the infected parts. Currently, timber value losses due to root rot are not calculated.
Model: Thor, M., Ståhl, G. & Stenlid, J., 2005

"Bonitet" as calculated according to Hägglund & Lundmark(1997, Bonitering II) has been added.

GIS-layers for CountyCode, ClimateCode and DistanceToCoast are included in the forest database (old forest databases are upgrade automatically) and used by the system to look up codes from coordinates. Requires that coordinates are available in the stand register (a forest map is not sufficient since it is imported afterwards). Also applies to data imported with tree list importer and FMPP data importer. see StandRegisterFileSpecification

You can now link your own images to an alternative in PlanEval. Note that PlanEval can be used independently from other Heureka applications and that an MCDA problem analysed does not even have to be a forestry problem.

Now and then some users have by accidently selected Regeneration Model = "Database" instead of "Simulation". "Database" means that a tree plot is selected from the Hugin young stand inventory database to represent the new tree population, and that a random factor determines what kind of regeneration is obtained. The option "Database" is mainly available as an option to be able to compare RegWise with its predecessor Hugin. From version 2.1, you must actively set a new parameter called "Allow Database Regeneration Model" to true in control table Treatment Model to be able to select this option. If set to false (which is default), the alternative will not be selectable.

Optimization settings (termination criteria and whether decision variables should be rounded to integer values) are now saved as part of the project settings in PlanWise. The choice of solver is not saved since the receiver of an exported project may not have access to the same solver.

The calculation of net present value is no much faster then before. The problem was that the final felling period range set in control table Treatment Program Generator (Final Felling Period Max) was not used, but all periods were tested with an enormous number of alternatives evaluated as a result. This has been fixed.

Bugfix: Initial state was not calculated automatically when using NFI-data and changing what inventory years to include

When changing what inventory years to include in an analysis when using NFI-data the initial state was not calculated. This lead to that added treatment unit were not put in the correct forest domains. This has been fixed. The problem affected PlanWise and RegWise only when using NFI-data.

A major error in the price list calculation has been fixed. The error led to that the timber proportion of harvested trees was underestimated. You can read more about this error in the pdf-document below (only in Swedish). This has been fixed.
Fel i apteringsmodell.pdf

Bugfix: Pasting tree records from Excel to the tree list table in Enter Data Manually was corrupted in version 2.0

In version 2.0 a couple of new columns was added to the tree list table in the Enter Data Manually dialog, which made it impossible to copy and paste data from for example Excel. This has been fixed.

Comma-symbols in a forest domain lead to an error when assigning a stand to such as domain. This has been fixed.

Bggfix: Importing a treatment proposal with a treatment year in decimal form did not work

If the treatment year for a treatment proposal was entered as a decimal number, for example 7.5, it was set to year 0. This is now fixed.